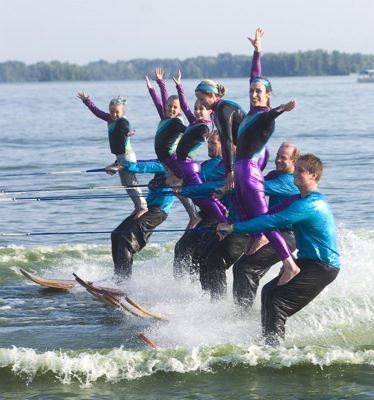 The 2011 Celina Lake Festival was a resounding success, despite the heat.  The Lake Improvement Association sponsored the popular Chippewa Lake Water Ski Show Team (shown here in a photo by Mark Pummel).

Here’s the AUDIO CLIP from WCSM:  CLICK TO LISTEN

Here’s the article written by William Kincaid for the Daily Standard:

As temperatures dropped slightly Friday evening, a large crowd turned out for Lake Festival events along Lakeshore Drive.
Festival co-chairwoman Michelle Emerine estimated a couple thousand people were on hand to watch a professional ski team perform on Grand Lake, followed by the traditional amphicar swim-in.
"It was great. I was really pleased," she said. "It was just nice to use the lake."
The Chippewa Lake Water Ski Show Team, Ohio’s only competitive water team sanctioned by the USA Water Ski Association, dazzled the masses with several stunts. The team also will perform shows at 1 and 4 p.m. today and 12:30 p.m. Sunday.
Oppressive heat on Friday afternoon likely was responsible for a small crowd at the sidewalk sales downtown.
"Well, we had our normal customers this morning," Dean Schweizer, owner of the Celina Music Store on Fayette Street, said about sidewalks sales, where he sold used CDs. "The heat obviously kept people away."
A thunderstorm rolled into Celina around 4 p.m. and sent vendors on Main Street scrambling to secure their items and tents.
"It’s slimmer than usual," Vicki Sodders of The Almond House, a vehicle selling various nuts, said about the crowd. "It’s kind of been slow all day."
Sodders has traveled to Celina from Elida to participate in the sidewalk sales for the last 14 years. She said sales were down from last year, but OK.
Many vendors said sales were good in the morning, but tapered off as the day heated up.
Even with the luxury of air-conditioning, the Mercer County Public Library didn’t have as many people stopping in to buy items at its annual Friends of the Library book sale.
"It was pretty down," librarian Elizabeth Muether said.
Library assistant Jean Shaw said people came in bursts. She attributed the reduced crowd to weather.
"All-in-all, we’re pleased with everything," she said.
"It’s not the lake, it’s not the festival; it’s the weather," said Bob Heitkamp, owner of Gamarama on Main Street.
Emerine estimated around 150 food and craft vendors were set up downtown and at Lake Shore Park. She said a few elderly vendors didn’t show up as planned because of the heat.
All vendor spots at the park were sold out.