In studying the old maps of Celina and Grand Lake, I found this Map of Edgewater Park, in the 1926 Sanborn Insurance Map of Celina, Ohio.

Note the Lake was identified as “Grand Reservoir,” on this 1926 Map of Celina.  Adjacent to the lake was the “Concrete Retaining Wall.”

On the land adjacent to the Retaining Wall was a series of Summer Homes, apparently having porches facing the Lake.  East of the Summer Homes was the Roller Rink, of which the Insurance Company noted as having “No Watchman, No Fire Protection, except from Celina Fire Dept.”  In the next building to the east, was identified as “REST;” perhaps, this meant that a restaurant was located in that building or that it was a Rest area?

North across Market Street, was the Amusement Park, with the Merry-Go-Round and the Dance Hall marked.  Across Park Avenue, directly across the street from the Dance Hall was another building, identified as a Dance Hall.  Celina’s local citizen, Charlie Ayers told all kinds of stories about attending the dances at Edgewater Park.  He told about the great Dance Bands of the 1940’s, providing the music, as well as other popular entertainers of that day.  Charlie even wrote about his party time at the Dance Hall at Edgewater, in his book, “Memories are Made of This,” in 1989.  When I read the book, I just never knew how much of Charlie’s stories to believe, but I am sure that they were all almost true! Charlie has been a Member of the Mercer County Historical Society, for years.

Most of the rest of the smaller buildings are identified with the letter “D.”  Apparently, those buildings were identified as Dwellings.  Concession Stands stood along Park Avenue, and Hamilton Avenue as it ran into Market Street.  Today, McDonald’s Restaurant is located where the Concession Stands once stood.  Livingston Street has replaced the name of the former Park Avenue.  Grand Lake Road has replaced the name of Hamilton Street on this 1926 map. 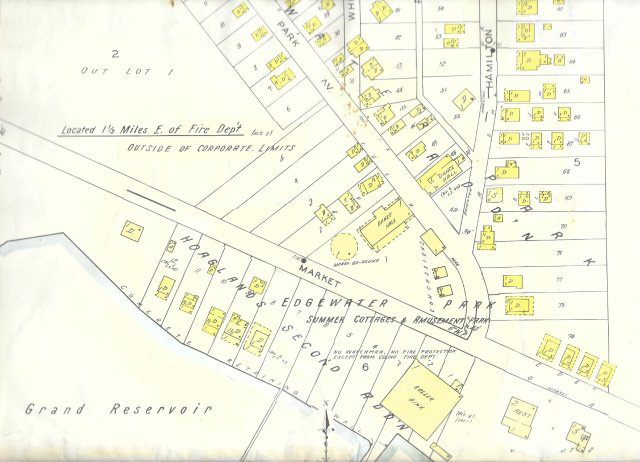 This map of Edgewater Park, by East Market Street and the Grand Reservoir, illustrates the amusement park, and places of summer’s fun times.

Years ago, Bowling Green State University’s Public Television did a program on the Amusement Parks of Northwest Ohio, and they included Edgewater Park in their program.  I invited local citizens who remembered Edgewater Park, to come to the Mercer County Historical Museum, and be interviewed for this B.G.S.U. Public TV Video.  We had a day full of interviews, with the TV station.  The people not only gave interviews, but also had a great time, telling old stories to each other.  I smiled as I watched the guests share their enthusiasm as they told their Memories of their youth at Edgewater Park.

Edgewater Park brought the community of all ages together for having good times in the summers at Celina on the “Grand Reservoir.”  Times have changed and the Village of Celina became the City of Celina.  Edgewater Park did not slide into the lake, but the Memories of Edgewater Park slid into a unique role of Mercer County’s History.  The Mercer County Historical Society is proud to have preserved a part of this history for future generations.  Perhaps, they will realize the value of citizens knowing their neighbors and having neighborhood amusement parks and dance halls and realize the importance of Mercer County’s History, for understanding the relationship between their past generations and their lives today.