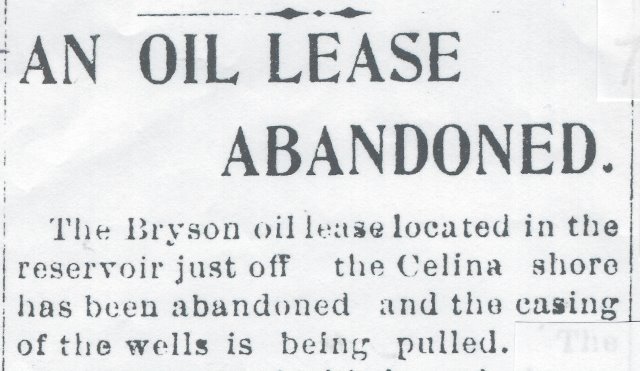 The last Thursday of January 1899,  an Ice Storm destroyed oil derricks on the Reservoir

The February 1, 1899 “Mercer County Standard,” made the following report:

“High winds and the ice on the last Thursday of January played havoc with the derricks in Lake Mercer.  A number of them were thrown over and in consequence the pumpers at several of the wells have been out of a job since that time.  Matt Alberry, who was out on the lake looking after the Mike Linn lease, was prevented from getting home that night and his family were greatly alarmed.  Matt was a pumper and saw the approach of the storm and realizing his danger made ready to start across the ice to the shore, a distance of about a hundred yards.  Just as he was ready to leave the derrick, he noticed a great cake of ice, a hundred feet or so square, break loose and begin to float from his domicile.  Thinking it a safer plan to take his chances on the floating ice, than on the frame structure, he gave a jump and landed safely upon the ice, which, instead of going his way, began moving from the direction of the shore and into deep water.  It took Mike but a second for him to make up his mind that he would soon be in a perilous position, and jumped from the ice into the water and waded to the shore, the water, for a part of the time, being up to his shoulders.  After reaching the shore, he had near a half a mile before reaching a dwelling.”

On February 18, 1899 “Mercer County Standard,” followed up with more about this storm.

“The Bryson oil lease located in the reservoir just off the Celina shore has been abandoned and the casing of the wells is being pulled.  The abandonment of this lease is due to the great damage done the wells by the recent ice upheaval during the thaw of a few weeks ago, when the high winds on Lake Mercer hurled the ice with such force against the derricks as to do great destruction.

“The casing in the best well was broken off down below the water’s level and the inflow of fresh water soon shut off the oil output.  When this lease was first opened up it gave flattering promise of being one of the best in the field.  People immediately became interested and the owners felt for a time that they had a bonanza within their grasp.  Slowly, but surely, the yield diminished, and the owners do not think it sufficient to justify any expenditure for repairs.”

I thought I would give you an update, about the status of the book about the history of the oil and gas wells of Mercer County, including the lake, and just across adjacent county lines.  The very reason that I began to do research about this topic, for a local history book, was that one of our Members of the Mercer County Historical Society, left a bequest in his Estate, to the Mercer County Historical Society, Inc., with the tag that I should write a local history book about the gas and oil wells.  I received this notice over five years ago.  Just so you understand this Estate, it involved properties in Florida, California, Oregon and Washington.   Somehow the Trustee of this Estate has given the Beneficiaries “mixed messages.”  He wrote us a letter that the Estate would be settled and we would receive a notice about that.  Then, he said something to the effect, that the Estate was “so extensive,” that it would take a long time to settle it.  I do believe that you can read between the lines here.  I will not bother you with the hundreds of pages of correspondence which the Trustee mailed to us, because it hurts my head.  However, I have done research and held interviews, and typed chapter after chapter, for this book.  We were given the word of the Estate that we would receive the property designated for us, but the Trustee finds all kinds of reasons to not settle the Estate.  The publication of this book about the oil and gas well history of Mercer County, Ohio depends upon the funds from that Estate.   Please have patience with me, for those of you who have been providing interviews about the oil and gas wells, to me.  I have many people to check back with.

The Mission of the Mercer County Historical Society is To Preserve Mercer County’s History and To Educate the Public about that History.   As this New Year of 2019 begins, I will share the latest news of the Status of the publication of this book, as well as the great stories of the oil and gas wells, with you.