So, what exactly is wrong with Grand Lake St. Marys?

There’s been a lot of talk lately about the condition of Grand Lake St. Marys, and if Summer 2010 is any indication, the situation has rapidly grown worse in recent years. The unsightly blue-green algae blooms and their accompanying stench, in addition to their high toxicity, is a concern to all GLSM stakeholders: residents, tourists, campers, boaters, outdoor and wildlife enthusiasts, producers, businesses, and everyone else who lives in, works in, or visits the watershed. To better understand what must be done to prevent Grand Lake St. Marys from further decline and restore the lake to a recreational, wildlife, and economic hub, we have to first understand what causes such poor water conditions in the first place. The following offers details on toxic algae blooms, breaks down those catalysts that cause them, and offers links for in-depth detail on each.

What Are Toxic Algae Blooms?

Learn more in our Knowledge Base:

The Grand Lake St. Marys water crisis has been brought on by a number of conditions over the past decades, including:

Nutrient runoff from surrounding land, especially phosphorous, that fuels the overproduction of toxin-producing bacteria such as blue-green algae. These toxins not only degrade water quality, they can cause health complications in humans and animals ranging from mild rashes and sneezing to severe gastrointestinal distress and convulsions, respiratory distress and failure, paralysis, and death. Learn more

Industrial and residential drainage piped directly into the lake adds unfiltered wastewater, nutrients, and chemicals to the problem. Learn more

Political inactivity that has stagnated progressive thinking along with the water. Learn more

Nutrient runoff from livestock waste, fertilizers, and other sources is one of the major reasons for lake degradation. Rainwaters wash waste and fertilizers from agricultural land into tributaries that ultimately lead to Grand Lake St. Marys, which has loaded the lake with nutrients such as phosphorous and nitrogen. Between 150,000 and 200,000 tons of silt enter the lake annually. 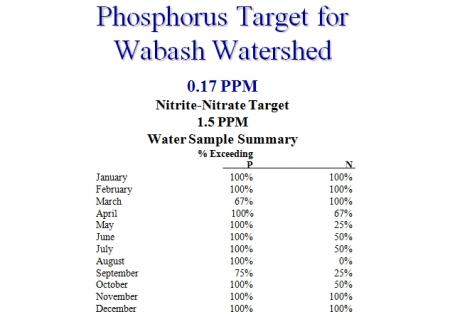 The abundance of phosophorous and nitrogen upset the natural balance of the ecosystem and provide a breeding ground for blue-green algae. Despite the name, blue-green algae is not a plant but bacteria that gets its energy through photosynthesis (cyanobacteria). 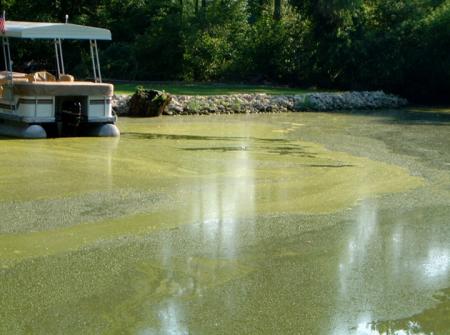 Agriculture isn’t the only source of nutrient pollution in the Wabash Watershed, but it is the main contributor according to the Army Corps Of Engineers: 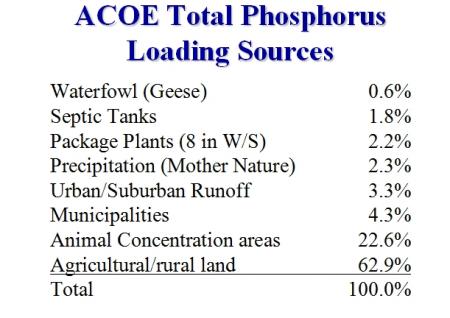 Nutrient runoff is facilitated by:

Subsurface drainage tiles provide a conduit for nutrients to reach the lake faster. 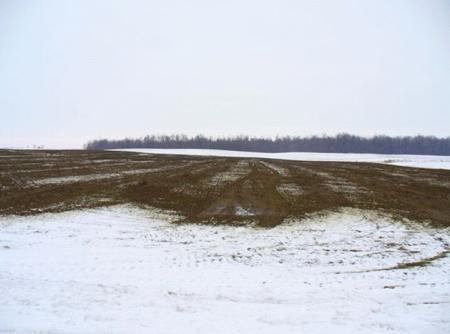 Spreading manure over ice in winter months means the manure flows to the lake along with the meltwater in the spring. 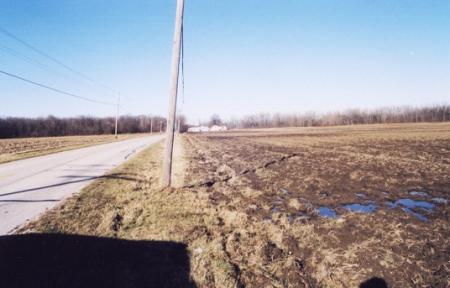 The fact that the Greater Grand Lake St. Marys Region has some of the highest agricultural activity in the nation. 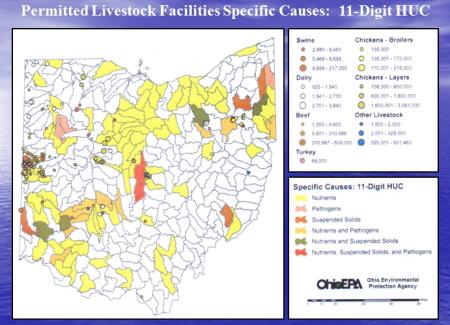 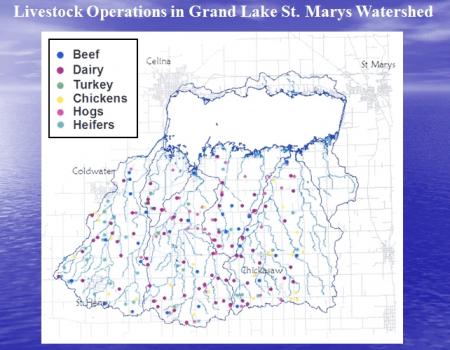 Another source of pollution for Grand Lake St. Marys is industrial and commercial drainage. Some sources are directly piped into the lake via industrial and residential channels. Examples include septic tanks, package plants and the lack of community sewage treatment facilities. 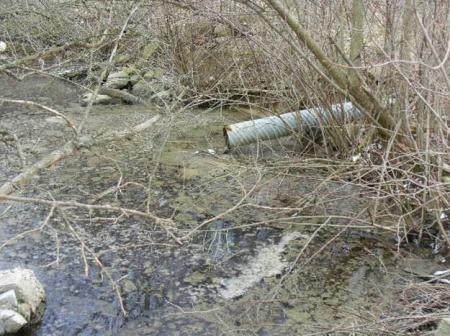 Other pollution sources include residential lawn fertilizers and waterfowl.

Erosion and sedimentation strip Grand Lake St. Marys of her shoreline and leave a thick layer of muck on the bottom of the lake.

The problems are not independent of pollution, but rather examples of how one issue can snowball and create others. In a nutshell, it goes like this:

Pollution runs off into the lake –> Pollution/phosphorous and resulting blue/green algae kill shoreline plants –> Without a natural root system to hold soil together, the shoreline erodes and fills the lake with sediment

Nutrient runoff isn’t the only thing that has contributed to this issue. Lakeside developments that do not preserve natural flora or otherwise plan to combat erosion are also responsible. 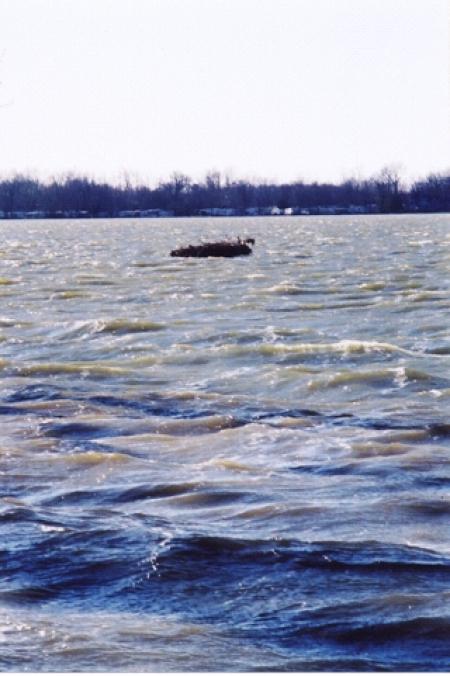 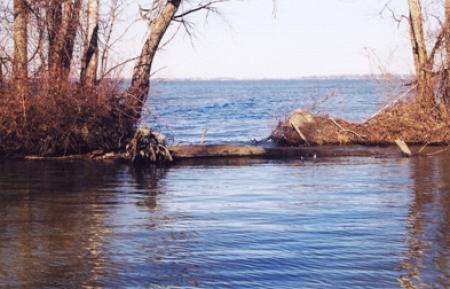 In the photos below, all taken circa 1965, you’ll notice the abundance of vegetation.  The last photo is a present-day photo of Prairie Creek Island that demonstrates how widespread the erosion issue is. 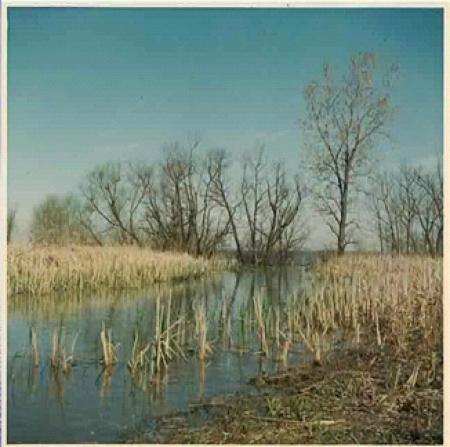 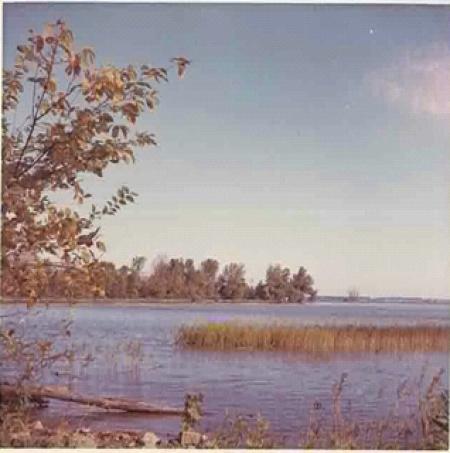 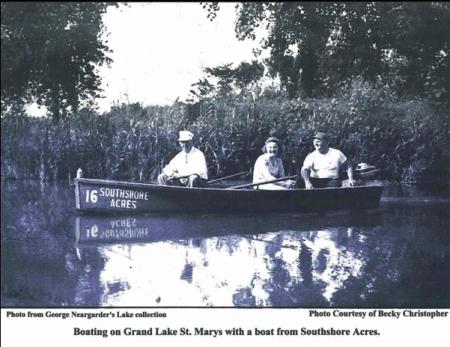 Grand Lake St. Marys is officially owned by the State of Ohio, which means that legislative and enforcement falls under the state’s jurisdiction. In many ways, this ties the hands of local stakeholders to affect direct changes without the approval of the state.

The state has a responsibility to clean and maintain Grand Lake St. Marys, yet political action and legislation does not always align with that responsibility. The state along with the Environmental Protection Agency both have interest in creating and enforcing laws that regulate and enforce pollution intake, agricultural activities that lead to nutrient runoff, and other variables that contribute to poor water quality in Grand Lake St. Marys.

The good news is that Ohio’s officials are starting to take notice, and have taken action to help save Grand Lake St. Marys. We’ll cover all the action being taken to save the lake in a future installment.

In the meantime, you have to do your part to save Grand Lake St. Marys!