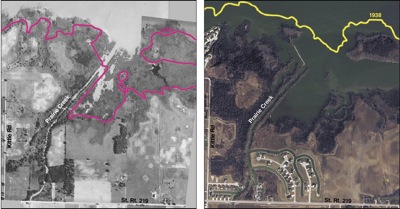 These aerial photos of the Prairie Creek area on the south side of Grand Lake show the loss of littoral wetlands in 70 years. The photo on the left is from 1938 and the magenta line marks the current shore line. The photo on the right is from 2009 and the 1938 shore line is marked in yellow. By 1973, the wetlands disappeared due to land development, increased runoff and the loss of adequate vegetation along the shoreline, according to the Ohio EPA. Sources: 1938 photo from the Mercer County Engineer’s Office, 2009 photo from the Mercer County Tax Map Department.

Re-creating the past may be a remedy for the future of Grand Lake.

Officials are working on a plan to restore a type of wetlands destroyed on the south side of the lake by 1973 due to land development. One consultant called the loss of these wetlands a "significant factor in the degradation of the lake."
Joseph Pfeiffer of KCI Technologies, a consultant for the local Lake Restoration Commission, said littoral fringe wetlands at one time existed in shallow water near shorelines and slowed the lake’s intake of phosphorus and other nutrients that promote harmful blue-green algae growth.
A 1938 aerial photograph of the south shore shows littoral wetlands occupying about 20 percent of the lake’s "footprint" or 2,800 acres. The once sprawling wetlands had the ability to process 25,200 pounds of phosphorus per year, Pfeiffer said.
"A portion of those wetlands were some thousand feet or more from the shoreline in a foot or two of water," he said.
Not only did the wetlands act as a buffer to prevent runoff, they helped prevent erosion of the shoreline from wave action, he explained.
Those wetlands have been wiped out in the last 60 years due to the rapid increase in lakeside housing and commercial development, said Dina Pierce of the Ohio EPA.
"Yes, development has been detrimental to water quality in the lake," she said. "Housing creates some of the same impact as agriculture, namely runoff of soil and nutrients."
Runoff feeds blue-green algae, which has bloomed extensively the last couple years and resulted in the state placing water advisories on the lake. Lake traffic has decreased dramatically, devastating area businesses who rely on tourism.
Much of the housing along the lake is too close to the shoreline to allow adequate vegetation to filter the runoff, Pierce said.
According to Army Corps of Engineers’ regulations, developers must account for wetland losses by replacing each developed acre with at least one other acre of wetland in the same watershed.
Pierce said portions of the regulations weren’t in effect when initial development began along Grand Lake. In some cases, the rules simply weren’t enforced, she said.
The Clean Water Act and National Environmental Policy Act began in the 1970s, said Lee A. Pittman, regulatory project manager for the Corps.
"Environmental guidelines have tightened a lot since then," she said.
Wetland developers today go through a lengthy mitigation process to obtain a permit to build. If they fail to follow the regulations, they can face civil or criminal penalties from the U.S. EPA, Pittman said. Violators often are discovered after neighbors or other agencies contact the Corps, she added.
Data on how much land remains available for development around the lake was not available.
Milt Miller, a member of the Lake Restoration Commission (LRC), said the loss of the wetlands makes him sick, but the damage is repairable.
"If that’s what nature made, it should be our road map to fix it," he said.
The first area planned for restoration is Prairie Creek, where various water quality improvement projects already are in place such as floating wetlands and Airy Gators to infuse oxygen. Sediment dredged from the bottom of the lake will be used to rebuild the wetlands that bordered the shoreline years ago. Pfeiffer stressed no channels or private lakefront properties would be obstructed.
Information about the process will be available at the LRC’s tent along Lakeshore Drive in Celina during this weekend’s Governor’s Cup Regatta.
Pfeiffer said the phosphorus in the sediment used for the wetlands would no longer be available in the water column throughout the lake. It would be absorbed by foliage planted to help process the nutrients, anchor the sediment and pump oxygen into the water, he said.
The Army Corps of Engineers has agreed to engineer and design the littoral wetlands at Prairie Creek and possibly five other zones; all but one are on the south side of the lake. The agency has discussed utilizing commercial dredging equipment for maximum efficiency.
Details of the plan and cost estimates are not complete. A letter of intent for the alliance with the Corps was signed earlier this week by commissioners in Mercer and Auglaize counties, who serve as the Grand Lake St. Marys Restoration Community Improvement Corporation (CIC).
The Corps is immediately seeking a $100,000 match to get the initial project under way. Commissioners discussed the proposal this week but took no action on how to handle the financial obligation. The most likely plan involves taking the match money from one of the counties’ coffers and redepositing it when the funds are raised by the LRC.
Miller already has begun a campaign to raise the money. He’s confident the wetlands restoration project is another positive step toward a healthy lake.
"Mother Nature is a wonderful creator. We can follow her lead to get the lake back to where it needs to be," he said.

By Shelley Grieshop, The Daily Standard