Data, not emotion, will determine course of work 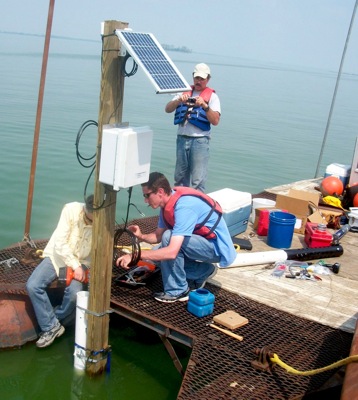 Today the mood is more level-headed as officials focus on an arsenal of science to study and attack the lake’s toxic algae problem.
"The science is the most important thing so we can understand what is going on and help us lay out the path to move forward," said Brian Miller, manager at Grand Lake St. Marys State Park. "We’re done sitting around, and we’re seeing action and the science is guiding us."
Formed in January 2010 to restore the lake, the local Lake Restoration Commission (LRC) has raised about $826,000 in donations for water cleaning equipment and scientific analysis. The LRC has used the money to leverage another $634,000 in grants and $11,500 of in-kind donations of labor, equipment and donated time.

Some of the LRC funds were used to purchase giant aerators for bays at Southmoor Shores and Park Grand Resort. A study at Southmoor Shores shows the device improved water quality and reduced the muck at the lake’s bottom from 18 to two inches. Called Airy Gators, the devices infuse oxygen into the nutrient-rich sediment and allow beneficial organisms to grow and eat organic material.
The jury is still out on the effectiveness of three sediment collectors the LRC purchased and installed in Beaver, Big Chickasaw and Barnes creeks. They are designed to capture sand and sediment in flow from rain or snow melt before they get into the lake. They were not effective when record rains this spring caused the lake to back flow into creeks.
"The collectors need flow to work," LRC member Milt Miller said. "As the lake backflowed, they stopped working."
Officials are working with manufacturer Streamside Systems, Findlay, to make the units work better, he added.
Marysville-based Algaeventure Systems added silica (sand) to the lake to feed beneficial diatom algae to overtake the lake’s toxic algae. The study proved inconclusive. Company officials, who opened a satellite office along West Bank Road in Celina last year, say they will continue to study the lake.
More than a half dozen universities also are studying the lake, which last year became the epicenter for toxic blue-green algae blooms in Ohio, if not the nation. Grand Lake was among 21 state water bodies with toxic algae blooms last year.
Results from two studies helped the state launch its most aggressive assault against the algae – a $3.4 million alum treatment that began June 2 and should be complete by the end of the month. Alum deactivates phosphorous, the toxic algae’s main food source. State scientists are collecting data throughout the treatment to record phosphorous, nitrogen, chlorophyll and dissolved oxygen levels.
Tadd Barrow of HAB Aquatic Solutions said preliminary tests show an overall decrease in chlorophyll in the lake water where the alum has been applied. Chlorophyll is an indicator of algae density. Results from more conclusive state testing will come later, he said.
"The true test will be the phosphorous concentrations, which are being measured by the Ohio EPA," Barrow said.
Alum is being used as a short-term solution to lessen toxic algae blooms so they do not disrupt recreational use of the lake. Other short-term solutions include increased dredging and rough fish removal.
Studies done after last year’s toxic algae bloom also caused the state to change its water advisory protocol to not include warnings against boating and eating fish from the lake.
The state issued a no contact advisory on Grand Lake last year that warned against boating and eating the lake’s fish. Further studies showed toxins were not present in fish tissue and boating posed no human health risk.
The lake currently is under a public health advisory, which advises people not to swim, wade in or swallow the water. The two other advisory levels in the state’s new protocol are bloom and no contact.
State officials said they erred on the side of caution last year by warning against boating and eating the fish because the issue was so new and data was limited.

Research stations in the water

Just last month a U.S. Geological Survey research buoy and four Ohio EPA water monitoring stations were installed in the 4,900-acre alum application area in the lake’s center. Devices record levels for water temperature, dissolved oxygen, water ph (acidity) and chlorophyll, which measure the amount of algae in the water. The USGS buoy records data every 30 minutes.
The equipment is already providing information.
"On calm days, the lake stratifies and we have low dissolved oxygen levels on the bottom and higher levels on top," Brian Miller said. "When we have wind, the levels stay even throughout the water. When we get low levels at the bottom, we can have fish kills, shad mostly."
ODNR spokesman Scott Fletcher said the devices determine when each day’s alum application can start and stop, based on the dissolved oxygen levels in the treatment area.
"We’re getting a ton of information from this station and the other four," Fletcher said. "In addition to the fact that there’s never been a treatment this large tried before, there’s never been one with real time water monitoring done like this."
Fletcher said the groundbreaking data will help the state plan and execute future alum treatments on the lake and provide insight for those dealing with lakes and rivers with the same issues.

New ideas also have been thrown at area farmers, who have been under the gun to change manure management practices that ultimately help the lake. Most of the phosphorous – found in manure – that makes its way to the lake comes from farmland, the main land use in the lake’s watershed.
The state in January designated the watershed distressed, triggering new manure rules for watershed farmers.
Ag Solutions, a local group formed to help farmers, is looking at cost-effective alternatives to applying manure. Members are looking into the benefits of winter cover crops, are speaking with companies that turn hog manure into an asphalt-like substance and use phosphorous from hog manure to make a fertilizer additive, and has submitted a $50,000 grant application to USDA to have experts study the manure situation and make recommendations.
The group hopes to have an informational booth at the Governor’s Cup Regatta on Aug. 26-28 on Grand Lake. The event was canceled last year due to the water advisory.
"We need to start attacking this problem professionally and from a practical standpoint," said James Keller, president of the Marion Community Development Organization that formed Ag Solutions. "Our primary mission is to get this manure off the ground and do it cost effectively. We have a group of livestock producers anxious to solve this problem."

About 60 proposals from companies throughout the U.S. and beyond touting products and/or devices to fix the lake have poured into the state the last two years. The U.S. EPA reviewed the proposals before the state this year issued a locally-created restoration plan focusing on long- and short-term solutions.
The LRC recently hired Battelle, a known research and development firm, to go over the proposals again for two reasons: to make sure no good ideas were missed and to make a recommendation on how to treat the many dead-end, residential channels on the lake, Milt Miller said. Channels represent 10 percent of the lake’s total surface area.
"Last year Battelle worked on a six-month contract on the Airy Gator study and we also ran all concepts by them before we purchased anything, using their third party validation," he said. "They were extremely valuable so we wanted to bring them on board again."
The LRC also wants Battelle to determine how many Airy Gators are needed and where they should be placed in the lake to effectively treat it, Miller said.
"The one thing we keep hearing from all the universities and scientists is the lake is lacking oxygen on the bottom," he said. "If it’s introduced, Mother Nature has a huge capability to help heal the lake."

By Nancy Allen, The Daily Standard