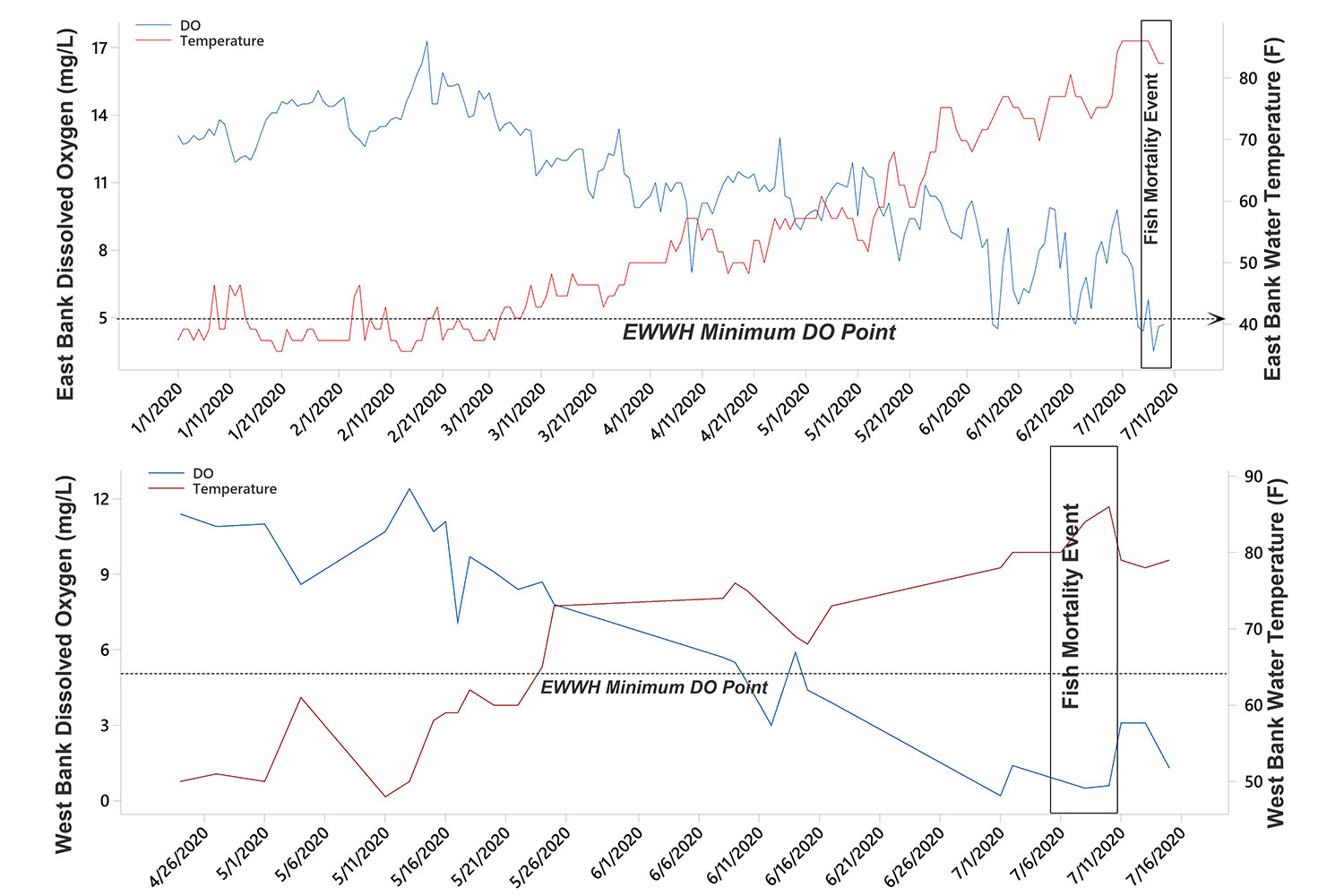 Note: this transcript was automatically generated and may contain errors.

Nick Rentz here with the Lake improvement Association today, I’ve got Dr. Steven Jacquemin with me here out at the Lake. And we have had so many calls, questions, emails regarding the fish die off. So, and it was obviously a massive scale event, it historical size event, and not the right side of history of course, that we want to be on.

But, but something that we need to discuss, because there’s been a lot of information, there’s been a lot of misinformation out there. So rather than me try to shoot from the hip and get these questions. Right. Let’s get the expert here. Let’s get the guy who’s in here day in and day out. So, Dr. J, I’m going to turn it to you in a nutshell, what happened to grand Lake with the fish die off?

Yeah. Nick, thank you very much for asking me to come talk. It’s always easier to have all the information in one place. And so, that’s my intent with, with talking to you guys today, is to put all that information in one place. So effective. Please, Grand Lake St. Marys is just coming off the heels of a massive fish, die off, fish die-offs, occur, not infrequently around the state of Ohio and lakes and reservoirs.

And there’s a variety of reasons and mechanisms that sort of underpinnings, fish die offs are not uncommon during spring and fall turnover, they’re also not uncommon during the, during the summer months. And this is specific to what’s happening with. With Grand Lake or what has happened this summer with grand Lake, a variety of conditions can cause dissolve to oxygen, to absolutely plummet.

Those conditions include, lots of, algae productivity. So when algae growth goes up, obviously the algae produce oxygen during the day, not as big of an issue, but at night, those algae, like every other living cell, they use oxygen. They take that from water. So at night you can have drastic dissolved oxygen swings as they respires.

The other factor. The other thing that sort of adds to this puzzle, is temperature just physical temperature as temperatures go up the capacity for water to actually hold oxygen in solution. Okay. It goes down dramatically. Warm water holds less oxygen than cold water., the other of this has to do with wind and wave action.

As you look at a windy day, you can see waves folding oxygen into the water. Almost like air into a dough as you need it on the table. Obviously with low wind. You don’t have that atmospheric exchange. All these factors coalesce, and they create a sort of perfect storm of really low dissolved oxygen events.

And that’s what happened here in grand Lake. I believe, somewhere in the video, there’s going to be a graphic that shows you, longterm trends of both temperature and dissolved oxygen, from both the East bank, where we are currently as well as the West bank of the Lake on the opposite side, from where we are right now.

Well, those three or four factors that kind of came together, fish require somewhere in the ballpark, five or six milligrams per liter of dissolved oxygen in the water. To, maintain standards, behavior, maintain standard physiology, and maintain life, quite frankly. , and so what we had was a period of four or five, six days where we had protracted, time periods of deal that was far below that five milligrams per liter at times, reaching close to zero or zero itself, obviously that’s not sustainable.

And as a result, widespread fish die off occurred. , I’m working with a variety of folks, here in the community, including Theresa Dirksen with the Mercer County community development office, with Nick, with the LIA, as well as some other faculty, over at Wright state, like Mark Cumberly and one of the local, chemistry professors, we were able to, assess the extent of the fish kill in total.

Our surveys revealed about 15,000 lost fish. , it’s important to note that number is a drastic underwrite. Estimate of the true number, how much of an underestimate it’s truly impossible to tell. , but that survey included about 175 acre search area. The die off was most prevalent in the central basin.

Are, you know, we’ve been at grand Lake for a long time. We’ve seen hot weather. We’ve seen them win. , why now? Why is this not happening to say a similar Lake like Indian? Yeah. So it really takes this sort of perfect storm of those things. Factors, you have to have a sort of large uptick and algae, right?

It’s a little bit greater capacity to keep the water. Cool. Indian Lake, quite frankly also has much more emergent vegetation with shades. The water keeps it cool. Any Lake also does not have anywhere close to the harmful algal blooms. Persistence that we experience regularly throughout the summer. So now this is interesting because right now, well, it, when we had the massive dial, okay.

No, not always. , when there’s plenty of excess nutrients, nitrogen and phosphorous, those high toxin levels are going to reflect high out blues and vice versa. Whatever. When you have a unique situation like this, where the dissolved oxygen goes to zero, there’s an interesting chemical reaction that happens along the bottom of the Lake and effectively all that phosphorous that’s bound in the sediment has the capacity to.

Release, it has the capacity to release because it’s no longer, being bound because of the different redox changes associated with low dissolved oxygen. What we saw with our monitoring were dissolved phosphorus levels that went up by a factor of nine or 10 X. And that’s incredible that huge uptake of phosphorus fuel the large bloom once the dissolved oxygen came back, that bloom sort of started to come back down as well.

And so what we saw was a big uptick in phosphorus without the corresponding nitrogen. , each one of these microcystin toxin molecules has about 10 different nitrogen groups on it. And so if you do the math on it, Their nitrogen becomes when it comes to toxin production, your main limiting resources. So it is possible to have a large bloom without the corresponding toxin.

If they’re not getting the materials to build it. Interesting, we generally don’t see that. No, we don’t. And generally we don’t see it because we have enough boats. So, so when, when you have somebody saying, you know what, with this much fish kill, it’s gotta be a pollution. , it’s sort of a right and wrong state because we have a pollution situation here at grade, like to a degree with, with.

That’s right. What we’re experiencing right now, is an indirect accumulation of, you know, a century of things happening. , what, this was not, was the result of. A spill or, you know, a bottle with a skull and crossbones on it being dumped into the Lake. That’s what, this is not, this is just a function of the natural dissymmetry, of the Lake.

And it would also cool down some of that surface layer, but in the same breath, we can look at this and say, if we didn’t have our toxic, if we didn’t have the amount of algae in here, we would need the way, correct? Yes. Okay. Yeah. Very good. Very good. Yeah, these are all I was getting. So I just wanted to try to clear up as much of this as possible, but I think we covered were most of the bases here.

Essentially to s it up, we had, we had very, very low dissolved during the leg nearing zero. , there’s not much that can live in. Just to note there’s all the oxygen. , it was not a single sick, you know, just a single pollution event as we just covered. , you know, it’s a number of factors heat when it gets, it gets us down here, along, along with our algal situation, that creates a historic fish die off, you know, w w what’s a shame is what’s lost in the fold, is this, this is a historic low microcystin number that we had out here at grand Lake at 7.6.

You know, so, yeah, I think we’re about 28 right now in the middle of the Lake. And. At the intake. So we expect that to, to kind of go back to where it normally is, this time of year, those numbers are right in range. And so, so yeah, I think we covered all of our bases here. I really appreciate you coming out and doing this really appreciate the help on the camera.

Really appreciate you guys. , all the support that you give the LIA and, and Dr. Jacquemin here at the university, for, for those of you, people that are playing the weekly contest, we love it. We’d love to support, if you’re not a member, please consider it’s only $20 to $30 a year. Do that Lakeimprovement.com.

Don’t forget the app. Just search Grand Lake St. Marys on the Android and iPhone platforms. And again, thank you. And we’ll see you on the water.